Trending News
“Don’t Be Pushed By Your Problems, Be Led...
“God Came Through For Me” – Nollywood Actress,...
“I’ve Always Had To Give Extra To Attain...
“You Cannot Call On The Name Of God...
‘I Believe It Is My Season And My...
“Hair Doesn’t Define Me, Either Way I’m Pretty”...
“Love Yourself, Life Will Be Fine And Happy”...
“Never Allow Anyone Steal Your Joy Or Happiness”...
“There Are Far Better Things Ahead” – Popular...
If You Tell My Sister To Stop Calling...
Home Celebrity Gossip and News “Naija Government Don See Us Finish Aswear” – Paul Okoye Reacts To Federal Government Approving N27.7Billion For Renovation Of The National Assembly Complex
Celebrity Gossip and News 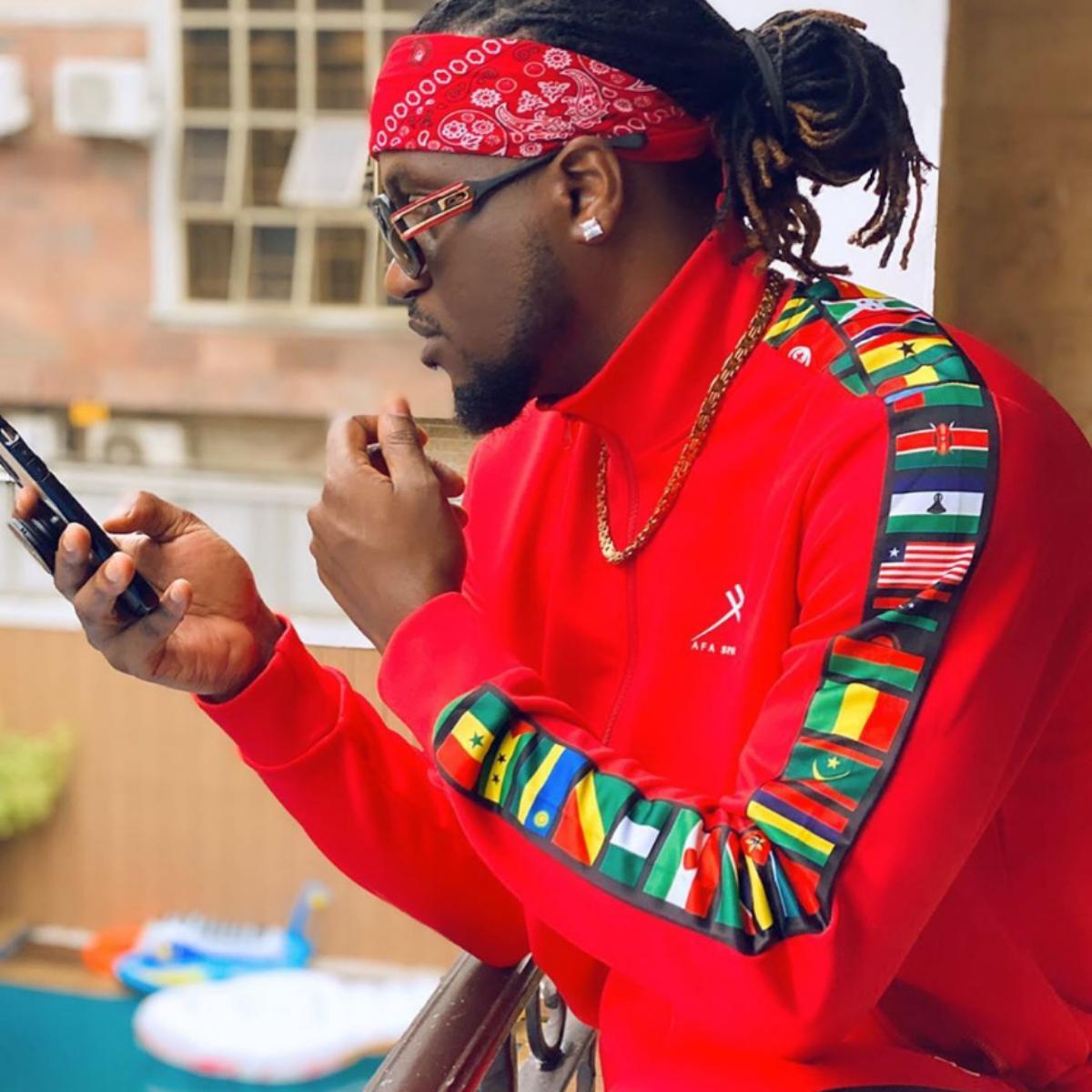 It’s no longer news that the Federal Government has approved a whopping N27.7bn for the renovation of the National Assembly complex. Even though the initial budget was N37bn, it was reduced due to the drop in the price of crude oil and a fall in the projected government revenue.

Shockingly, the the Basic Health Care Provision Fund which is meant to cater for all the primary healthcare centres across the 774 local government areas in the country, was significantly reduced by N44.4bn to N25.5bn. This clearly is a decrease of more than 42.5 per cent.

While reacting to this, Paul Okoye, in a tweet suggested that the Federal Government is taking Nigerians for granted. He wrote:

The Nigerian singer’s followers reacted by showing support for the “Audio Money” hitmaker even though there were those who criticized him and other celebrities.

READ ALSO:   "She Is Not Your Political Leader And Not Your Whipping Board" - Beyonce’s Mother Tina Knowles Reacts To Tiwa Savage Calling Out Her Daughter Publicly

@ChizySam: “You are just rude in everything. Rude in releasing mad jamz, lyrically rude, rude on stage, rude in telling the truth. Carry on bro, you owe nobody any apology for your comment, naija nah we get am.”

@SpiritPills: “FG approves N27B for National Assembly renovation. Cuts down Health and Education budget by more than 50% amidst a global Pandemic and constant lecturers strike. Some Nigerians took protest of George Floyd’s murder to the US embassy in Abuja but no protest for Southern Kaduna….”

@EzeokwuegbuI: “Dis is our fault, no one want to die but dey want to go to heaven”.

@Donflez: “Despite mr @rudeboypsquare post some re still abusing him.Can u stand firm & say Mr @rudeboypsquare ve supported bad governance rather he is here making good music that can relief you. But what does he get still abuse. Why not channel that same energy 2 the government #fuckedup”.

@jackson62728609: “Sumtimes it hurts me that people can’t see wht I’m seeing Or is it dat dose pple are also seeing what I’m seeing but chose to keep silence becus of fear or bribe? I wonder. If u go out to speak about this budget nw people will still shut you up that the government is doing great”.

@person_pikin1: “All dis tin na hear e end, na okoto meow una wey be celeb dey yarn for here, you guys are just tweeter ranters only una no fit take a step. If John Boyega can do it why cant you guys do the same?”

@DamilareAkinkuo: “That’s the issue in Naija. We all know the. Truth. But they’ve ensured that the majority are too poor that they have no time to question them”.

@WealthLekan4199: “Can u imagine, a government that couldn’t feed the poor for one month during this COVID period is approving N27 Billion for NASS renovation….. You just use d right word…they don see us finish”.

@Adimitchel: “You celebs are comfortable with what is happening in Nigeria. It’s so unfortunate!! You guys don’t want to lead the masses for a peaceful protest. All of us have failed in this country!!”

READ ALSO:   "The Good Lord Has Already Blessed This Month For Us, All We Have To Do Is Enjoy It" - Nollywood Actress, Luchy Donalds

@SpiritPills: “genocide, Katsina constant bandit attack, Uwaila, Ada and Tina rape and gruesome murder. Shameeee… I’ll say it and anybody can offended by it I don’t care, our main problems in the country is not leadership but religious, ethnicity and hypocrisy. This current Nigeria is gone…”

@Joeblac04209344: “@rudeboypsquare It’s painful how the ppo’s money is being wasted by these morons and the ppo have remain silent bout it bcos of #inorwandie and y’all celebs is time to act and not just tweet..look at what’s going on in America now all celebs up for it with actions and just words”.

@DonsonPabblo1: “By why can’t you top Nigerian artist take up the leadership from those old fools, you guys are advanced, get the vibe,the fans and the popularity to go for it, u guys should use ur fame and fans you have now to enter into the govt and take up this country leadership”. 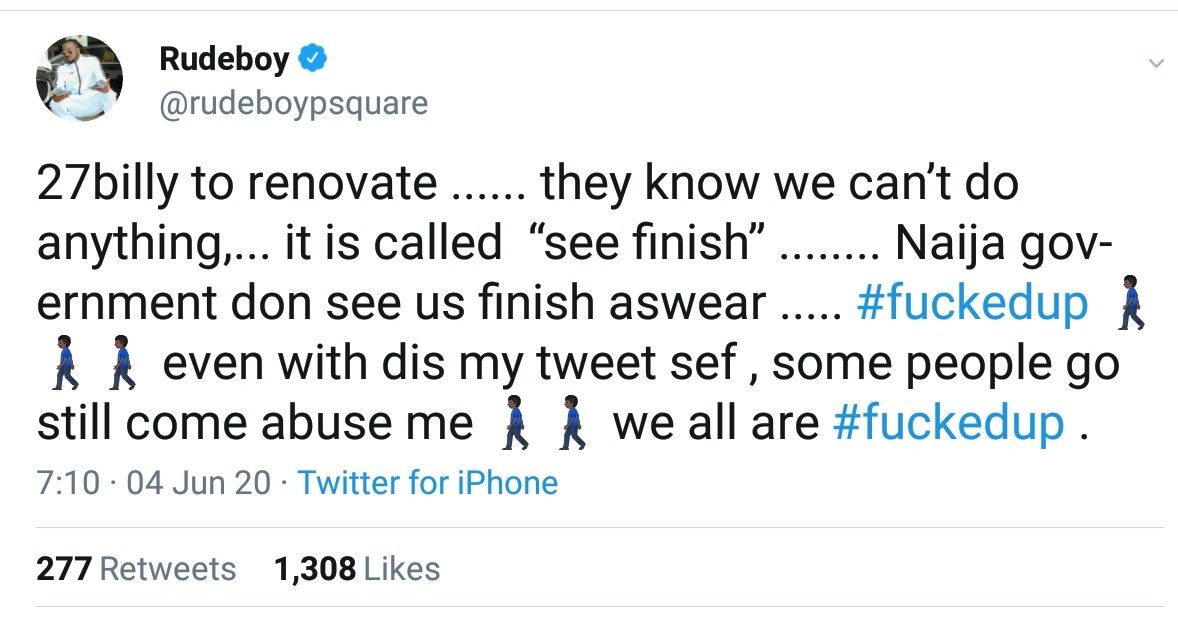 Click Amebo Book for all the latest Naija gist today!