Trending News
“I’m An African Queen And My Time Is...
‘Teach Your Children That Joy And Happiness Is...
“Who Send Me” – Completely Exhausted Nollywood Actress,...
It’s Script And Art Eye Candy Working With...
Here’s How Uche Jombo Reacted To Rumours That...
“The World Is Never Going To Agree On...
“My Job Is Simply To Make You Laugh...
Hollywood Comes To Nollywood 2022: Patience Ozokwo Wins...
“It Takes Courage To Win” – Nollywood Actress,...
Adunni Ade Brilliantly Gives Advice On How Young...
Home Celebrity Gossip and News Ulysses Wilkerson: See How Police Officers Battered Teen Beyond Recognition Despite Being In Handcuffs
Celebrity Gossip and News

Ulysses Wilkerson: See How Police Officers Battered Teen Beyond Recognition Despite Being In Handcuffs 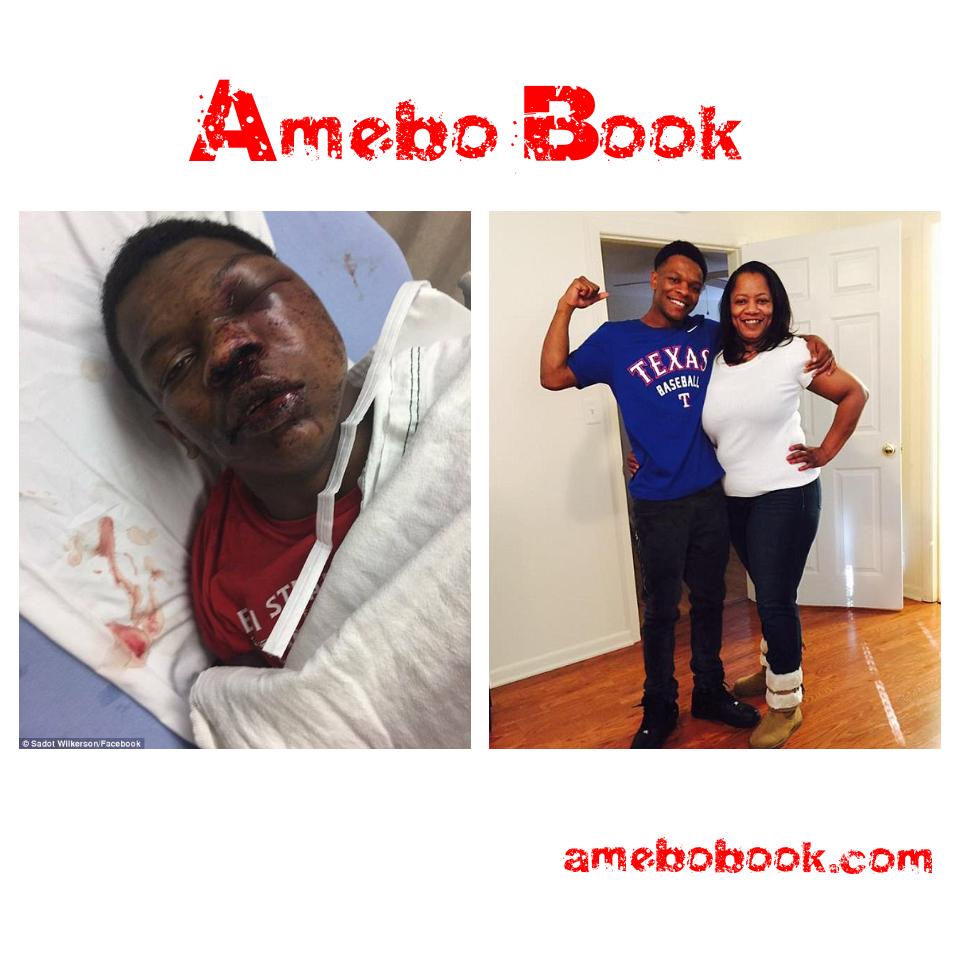 Ulysses Wilkerson: Troy Police Officers Battered Teen Beyond Recognition Despite Being In Handcuffs

According to the victim’s mother Angela Williams, her 17-year-old son, Ulysses Wilkerson, suffered swelling on the brain, trauma to the brain and a cracked eye socket after being manhandled by authorities in Troy, Alabama. The police officers battered the teen beyond recognition despite being in handcuffs. She wrote on her Facebook page: 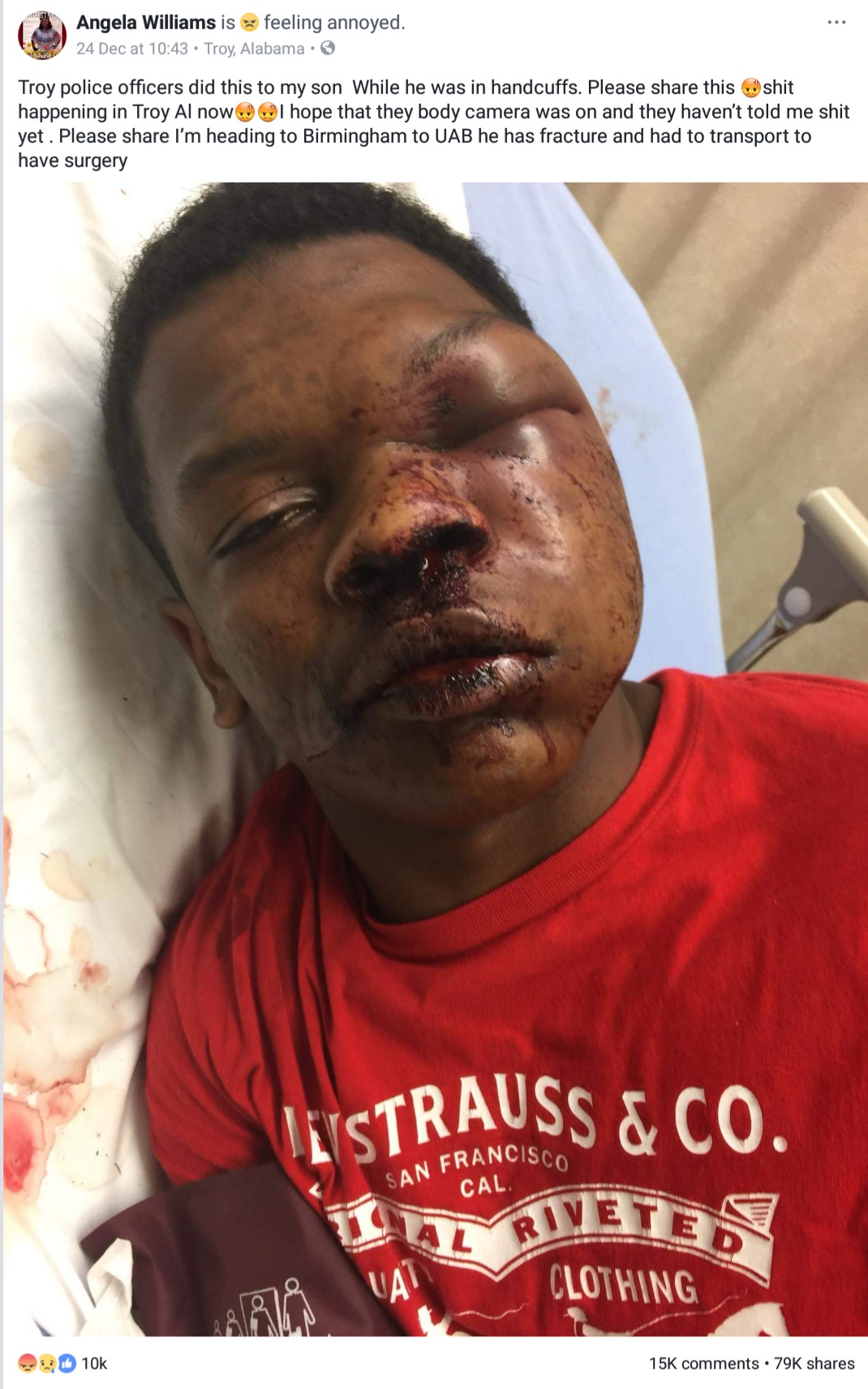 “Troy police officers did this to my son While he was in handcuffs. Please share this 😡shit happening in Troy Al now😡😡I hope that they body camera was on and they haven’t told me shit yet . Please share I’m heading to Birmingham to UAB he has fracture and had to transport to have surgery”. 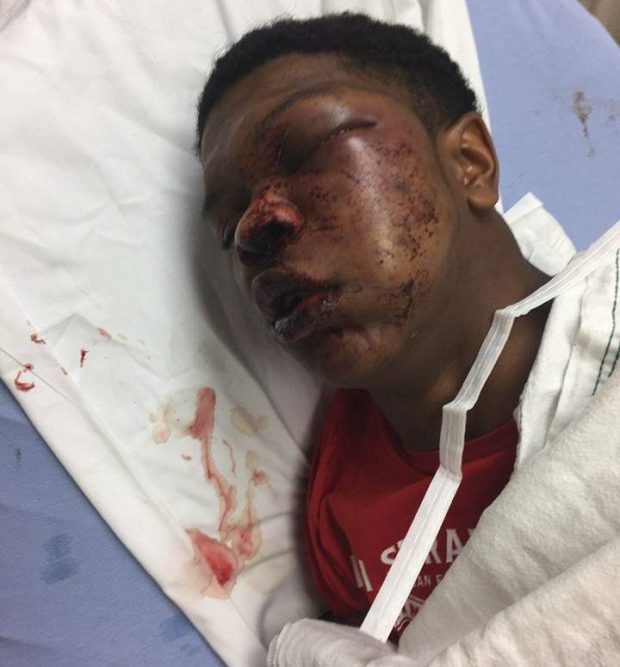 The incident unfolded Saturday night when officers saw Ulysses walking behind a closed business in downtown Troy. However, the authorities said that Wilkerson fled on foot when he was approached by the cops. It’s understood that when Ulysses Wilkerson was eventually caught, he refused to put his hands behind his back and reached for his waistband as if reaching for a weapon. Force was then used to handcuff and restrain him. 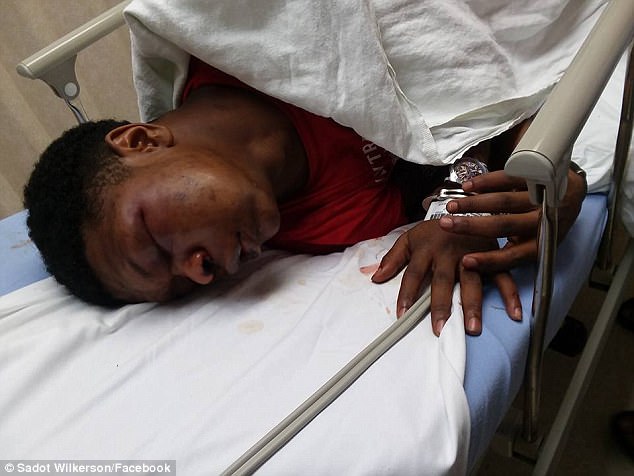 He was initially charged with obstructing governmental operations and resisting arrest, but the charges were dropped, the teen’s father, Ulysses Wilkerson Jr, said.

A handgun was found lying on the ground when officers later returned to the scene of the arrest.

Murder Was The Case: 29-Year-Old Man Barry Who Inked Tattoo Of His Spouse Face On His Back To Celebrate Wedding Anniversary Has Been Arrested For Fatally Pushing Pregnant Wife Tonie Wells Down A Flight Of Stairs To Her Death

Actress Juliet Ibrahim Questions Cheating Partners, Says “If You’re Committed To The Person, Stay With Them”