Trending News
Reactions As Yul Edochie Hails Himself As One...
Why I Love Acting – Juliet Ibrahim
M.O Bimpe Reacts After Seeing Her Husband Lateef...
“In whatever field You find Yourself, YOU MUST...
“Your Grace Na Follow Come” – Uche Elendu...
Rachael Okonkwo, Uche Elendu React After Their Colleague...
I Am Humbled By Your Love While Your...
My Mum Uses Her “Blessed Hands” To Make...
“God Took His Time With It” – Nancy...
“God Has Been Good To Me” – Nollywood...
Home Celebrity Gossip and News Pere Is The “Most Misjudged And Misrepresented Character Owing To The Complexities And Audacity Of His Personality” – Read The Full Statement + His Explanation In His Diary Session
Celebrity Gossip and News

It is no longer news that Pere has come under heavy criticism for his aggressive act of bullying Whitemoney. The last insult was when he brought out his belt as though to intimidate the housemate who has already been tipped as the strongest to win the BBNaija 2021 reality TV show.

He came on as an extremely violent person not good at all to watch on television. It is true that people want to be entertained but bullying and other acts capable of being labelled as depraved is totally unacceptable.

A statement has just been released on social media on his behalf by his handler who tried to soften his misconduct by referring to Pere as “Most misjudged and misrepresented character” before going on to add that it was as a result of “The complexities and audacity of his personality”.

Not done, the obviously misguided handler then compared Pere’s bullying and intimidation to a game – soccer in which a “formidable” player is identified and his threat neutalized.

According to the statement, the tactic would then be to “consolidate its strongest defence on that player and frustrate their tact by any means necessary.”

Where the page handler got it wrong is in soccer, red card is given when there is violent play irrespective of how great that player is. In this case, disqualification will take the form of the red card because there are also rules in BBNaija.

Read the statement below in full. 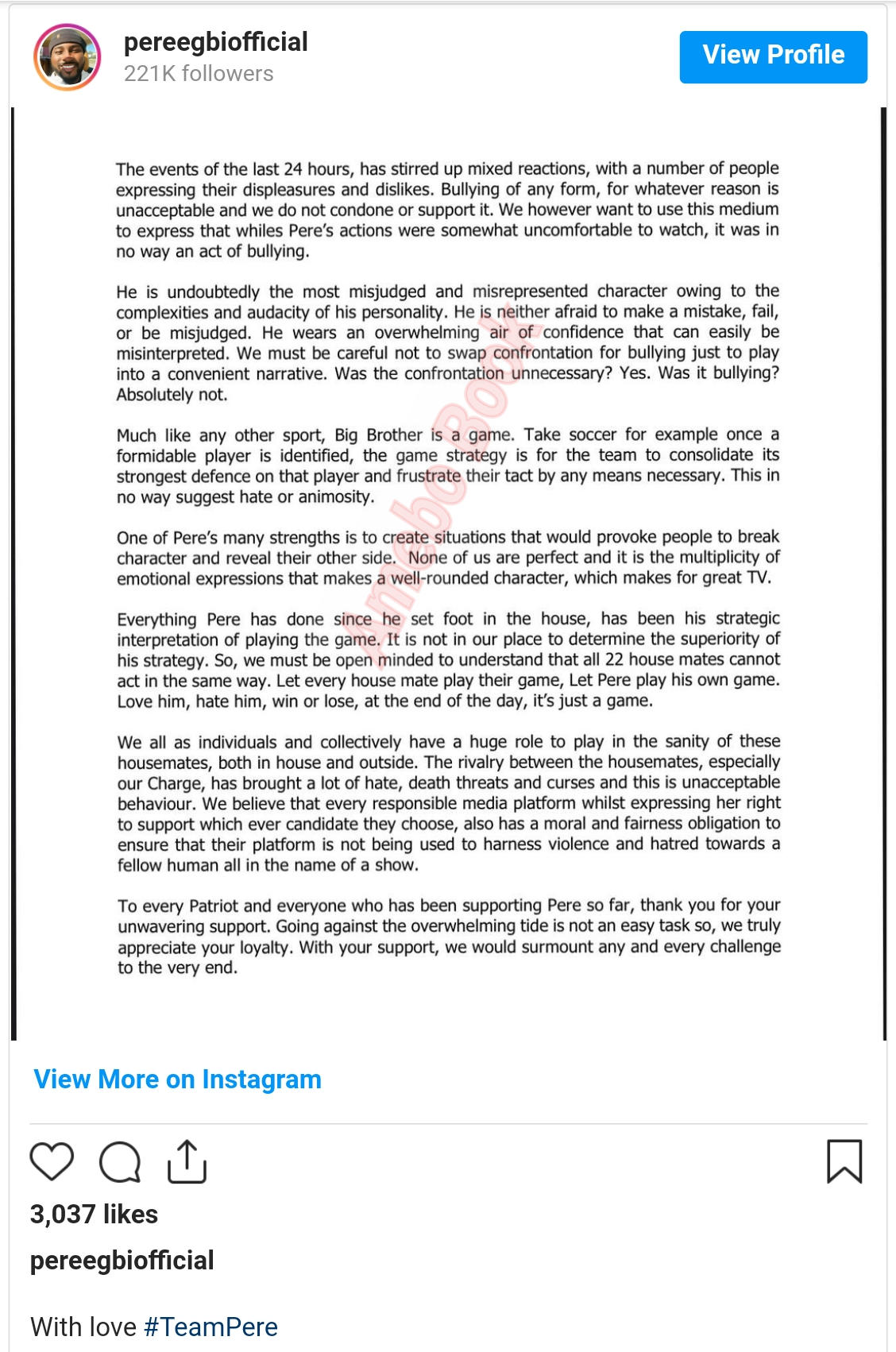 Watch Pere’s explanation during his diary session below.