Trending News
“Many People Are Passing Through Some Devastating Struggles”...
“No One Knows Your Worth More Than YOU”...
“My Husband Is The Most Handsome Man With...
“Don’t Be Pushed By Your Problems, Be Led...
“God Came Through For Me” – Nollywood Actress,...
“I’ve Always Had To Give Extra To Attain...
“You Cannot Call On The Name Of God...
‘I Believe It Is My Season And My...
“Hair Doesn’t Define Me, Either Way I’m Pretty”...
“Love Yourself, Life Will Be Fine And Happy”...
Home Celebrity Gossip and News ‘To Marry An Actor Or Actress Is Not Easy” – Browny Igboegwu Says As He Admits Holding Other People’s Spouse In Movies Could Lead To Jealousy + Reactions
Celebrity Gossip and News 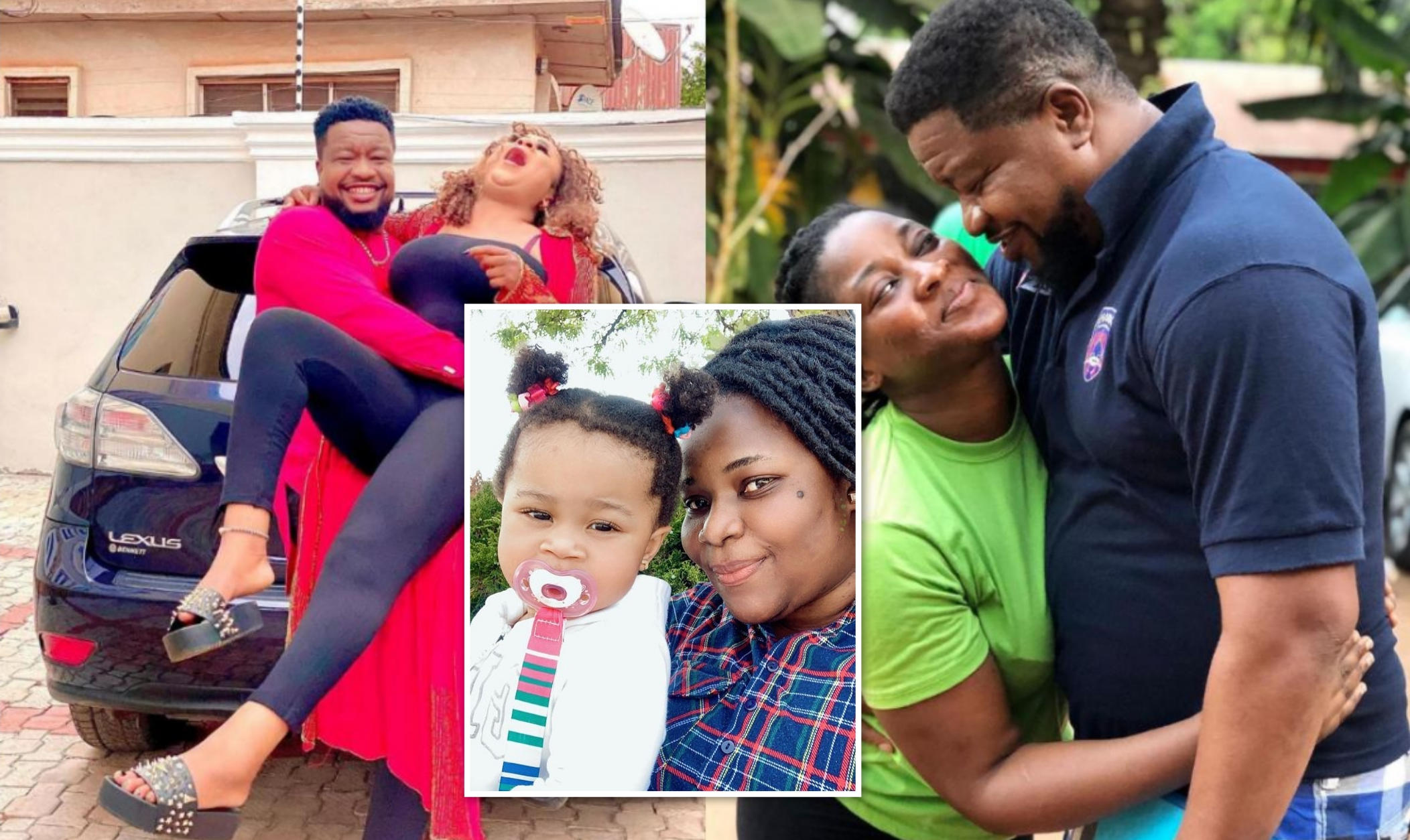 One of the most difficult things one can endure is seeing your spouse in a romantic position with another person. Such an act is sufficient to destroy the home forever.

However, this happens on the regular if you are married to one of the Nollywood celebs. You watch them lock lips on screen several times with other people, they appear to be enjoying every moment of it and then post it on social media. Not many people will tolerate it even if it’s just acting except you don’t really love your spouse and just in the marriage strictly for the financial benefits.

There is absolutely no way the family members of those involved in a marital relationship with a movie star will be happy. It is why many celebrity marriages do not survive. They break up after sometime.

We believe strongly that the Nollywood stars who regularly shoot romantic scenes should get married to their colleagues as they would understand each other better.

In a new Instagram post, Browny Igboegwu admitted that it is not easy being married to actors. He shared on set photos of himself with Uju Okoli and other colleagues he has had such scenes with on set. He captioned:

“Would you allow your husband or wife be held this way all in the name of acting.

I can only say am blessed”.

kelvinomori: “Don’t date or marry an actor/actress if you can’t handle them shooting love scenes, it’s their job😂”.

READ ALSO:   "Naija Will Make You Strong If It Doesn't Break You" - Nollywood Actor, Ray Emodi

ogidibestjoy: “Such wife’s are RARE…95% of ladies can’t endure it, especially the nagging once…all the same glory be to Jesus for the lovely wife u got😍 congratulations n more winning more Grace Amen 🙏”.

rubydawnsurgest: “I enjoy movies and actors in general but, I already know that I can’t handle my husband kissing and holding another woman in any capacity. I would not subject an actor man to my restrictions around that. We can be friends never husband & wife. Don’t need that money to eat or to drove or shop. #behonest”

brownwest16: “I won’t have a problem with my wife acting but kissing on the lip is out of it😡”.

saidahrukaya: “Some people too ain’t patience enough to see what his wife’s does in the name of acting forgetting the fact that it puts food in table”.

READ ALSO:   People Will Be Amazed At The Type Of Friends They Truly Have If Given The Opportunity To Witness Their Own Funerals - Nollywood Actor Dave Ogbeni

manontopmoney: “Never😂😂 and that’s why most of the actress did not marry till now, because no reasonable man will allow another man to be kissing his wife in the name of acting.”

___bagboy_millano: “Oga you Dey act film or you Dey tap current which one 😂”.

brendayounggarcia: “It’s not easy. But it’s up to the two parties involved to not get involved after the acting life is over.,”

jadejala: “I just wouldn’t watch his /her movies just to save my heart from breaking.”

1connieporter: “Yes because I’m secure within myself knowing I am the chosen at home”. 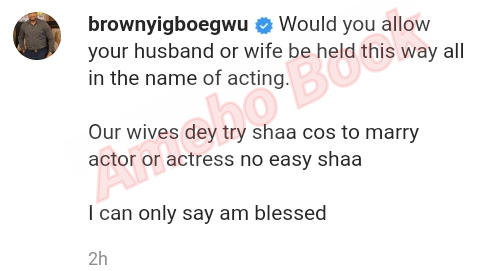 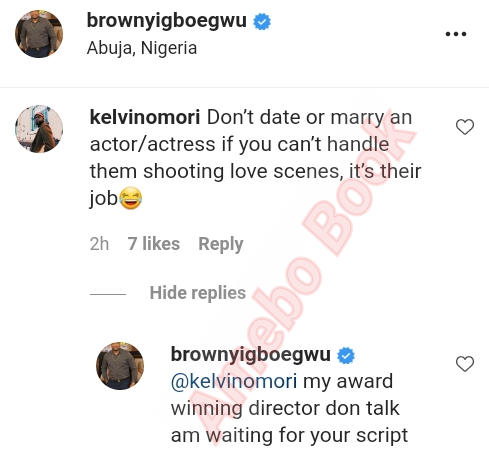 Let us know if you will tolerate it if married to an actor.